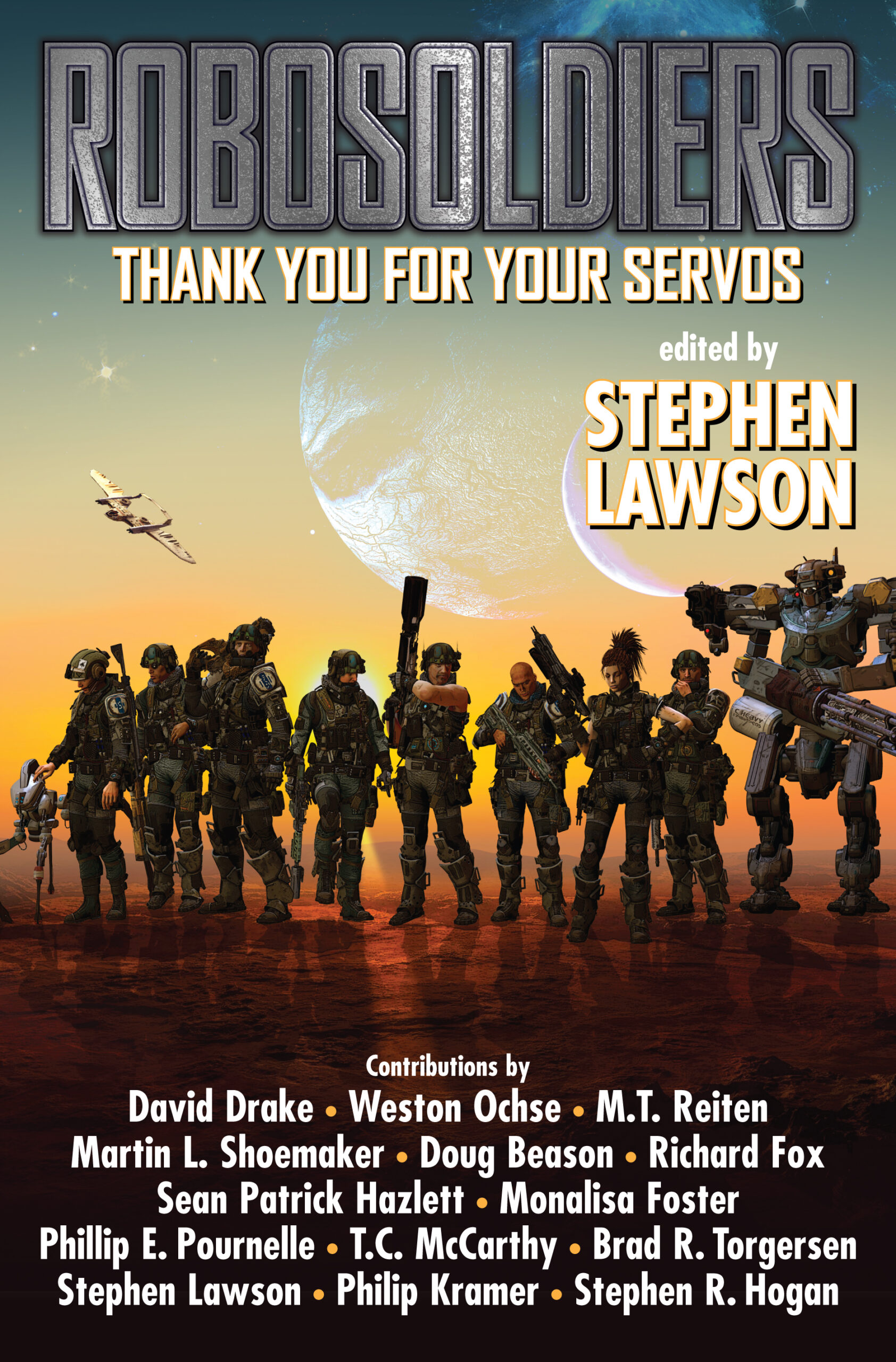 When Stephen Lawson* asked me to be part of his new Baen* anthology, Robosoldiers* an anthology about augmented soldiers and military robotics I wasn’t sure what I was going to end up writing. Unlike all the militarily credentialed co-authors in this anthology (some of these guys are real heavy hitters) I am the fork-and-knife school variant, if even that. I don’t have any military service or credentials. Country of origin did matter in the mid-1980s when I was still a cadet and aspiring to be more. The more was out of reach for many reasons, including the peace dividend that came out of the fall of the Berlin wall, a good thing.

My experiences have been on the other side of conflict–the civilians, the refugees, the collateral damage. I was born and grew up behind the Iron Curtain. I didn’t realize just how meaningless those two words had become until recently when a clerk asked me where “the incident” took place and I said “behind the Iron Curtain.” Without batting an eyelash she asked me the date and address so that she could request the medical records. I guess she was thinking it was a night club or something and maybe an ambulance or hospital was involved because she certainly gave no indication that she actually understood what she was asking for. When I related her request to close friends they suggested I give her the address of Ceaucescu’s grave or perhaps that of the Sighetul Marmatiei Memorial Museum for Communism Victims. I maintain that it would still be lost on her (and her ilk).

Stephen did jokingly tell me what he didn’t want (I am first and foremost a romance writer, whether that means romance or Romance) which is always helpful. So for those of you who read me primarily for my romances, know that Resilience* is not a Romance or a love story, although I could not resist working in a slight romantic angle at the end.

Readers and fans of mil-sf, like readers and fans of all other genres, are always clamoring for something new. For something different. So I gave it to them. In case I haven’t said it, Stephen, thanks for affording me this opportunity because you knew going into it that it was going to be different and let me play anyway.

What doesn’t kill you makes you stronger. Or so they say.

They are full of shit.

But then again, philosophy has never been my strong suit.

My scars are the first thing people notice about me. Even as they avoid noticing, looking anywhere but my face, the scars define me in their eyes.

It took me awhile to get used to the locked gazes, the way people’s eyes would unwaveringly lock onto mine because eyes are supposed to be safe.

One of the more annoying things about my PTSD implant (or my anti-PTSD implant as the doctors would like me to think of it) was the way it—oops, I’m supposed to think of the intelligent agent as “she”—talked to me. It wasn’t its fault. It was the way “she” was programmed. She goes by Nicki. It’s supposed to be a “she” because female rape survivors are paired up with female counselors. Something about trust.

Like so many sailors, soldiers, marines, and airmen—I was never really alone in this—I was a casualty of war. Wrong place. Wrong time.

As far as billets went, a military air traffic controller in Germany was about as safe an assignment as possible. I wasn’t going into a war zone or into combat.

Unfortunately no one told the bad guys. And they wouldn’t have cared. I was alone and unarmed. I hadn’t even been in uniform. Just another tourist as far as they were concerned. That is, until they found my ID.

“Ground yourself in the present,” Nicki said. Her voice was always calm, hypnotic, meant to be soothing, and supposedly tailored just for me.

I took a deep breath, held it, and then let it out slowly to a count of four, my belly rising, my hand against my chest. It was supposed to be calming, part of a set of coping mechanism that I’d been taught. I did it to shut Nicki down. It—she—always booted up when my hypothalamic–pituitary–adrenal axis kicked into overdrive. I hated that I knew that term. I shouldn’t have to know what an HPA-axis was.

About two years ago, I was recruited for a clinical trial to help test brain implant technology. Never my favorite thing, the MRI was even less so after my month of captivity. The jack-hammer sounds of the magnet were too reminiscent of gunfire, the having to lay still too reminiscent of being bound to a bed, the voices drifting in over the speakers too much like their disembodied voices as I escaped into my head while I lay helpless underneath them.

And having to relive it all so the MRI could map my brain was no picnic either.

“This is a flashback. It’s not real,” Nicki reassured me.

It had been with me for about a year. Nicki controlled the circuitry—fine wires much smaller than a human hair—running through my brain and I had benefited from some of the physical stuff the implant does. Thanks to the mapping done by the MRIs, the implant knows which parts of my brain become active during a flashback. It keeps track not just of my pulse and temperature and respiration, but a bunch of other stuff. I stopped trying to figure it out. All I needed to know was that high levels of certain chemicals were bad and low were good and that the implant stimulates parts of the brain to counteract them. And then Nicki activates.

It—she—is a little bit like the imaginary friend a kid might have: completely real to me, right down to the way she “smells.” There’s a light blue halo all around her, something the designers put in, so that I wouldn’t think she was an actual person I was seeing. Thank God for small favors.

It has appeared to me as different people. I’ll be watching TV and find a character I connect with and poof, Nicki takes on her form, her mannerism, her facial expressions. She sounds like the character too, which bothers me far more than the other things. I think it was the blindfold. They kept it on almost the entire time.

So, I’ve stopped watching television shows or movies. I’d always been more of a reader anyway, but after a few months, she started manifesting as the female characters in my imagination, so she robbed me of that too.

“Where are you, Karlie?” Nicki asked.

“What are you doing?”

Except that there was no longer water in the pot. It was gone and the pot was giving off a metallic smell reminiscent of the way guns smell as they heat up. All that was missing was the sulfur and that too kicked in, a phantom scent courtesy of my memory.

With a trembling hand, I shut off the burner and leaned against the kitchen counter so I wouldn’t curl up on the ground. Once again, I’d become lost in the white-noise of boiling water. The last thing I remembered was standing over the stove, watching the first bubbles form along the pot’s bottom.