Diamond Eye by Kate Quinn is a recommended read. It gets so much right, including what it what was like to survive under the abomination of communism. 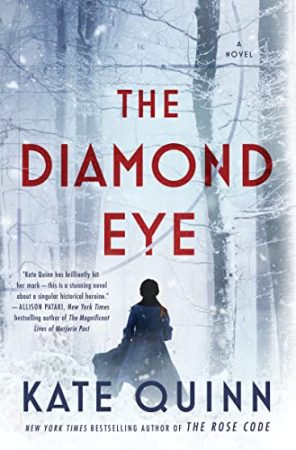 The Diamond Eye by Kate Quinn* is a recommended read.

Kate Quinn’s writing always seems to draw me. While her works are classified as historical fiction, they are–more importantly–works about characters. And not just any kind of character. Well-developed characters. Her writing is technically excellent and her storytelling is exemplary (at least it has been for everything I have read of hers). I am of the firm belief that readers will jump genres for good writing, good storytelling, and good characters.

Quinn supplements her storytelling with an afterword where she goes into where she took creative liberties for the sake of the story. Prioritizing the telling of a story–as opposed to mindlessly parroting a history lesson for the sake of showing us just how much research she did–is one of my favorite things about her works. She also serves the reader by focusing on just a few characters, not a cast of dozens that serves nothing but to (once again) show us how much research a writer did. Honestly, if we wanted a history lesson we’d go to a history book.

Since I grew up in Ceaucescu’s Romania (that means under the abomination known as communism) there were several things that resonated with me in this.

The first was the fact that the Soviet man was fine with paying lip service to standing shoulder-to-shoulder with the Soviet woman, but he still expected her to cook the meals, do the laundry, and subordinate herself to him. Like every promise made by Communism, equality of the sexes was and is and always will be a blatant lie.

The second was the fact that there was paperwork for everything, notably, filing for recognition/sanction of a sexual/romantic relationship between an officer (a man) and an NCO (a woman). As long as you filed the right paperwork, the Soviets were fine with officers screwing subordinates. All while they were actively fighting at the front, nonetheless. And while she was legally married to someone else. Yup. Pretty much how I remember it too.

The third was the fact that people were reported and shot for defeatism. Defeatism was saying anything that criticized how things were going. It was grumbling about the length of lines, the lack of food, the corruption of the Soviet system, the sexism, the double standards, all of it. It really hit home and it’s alive and well today in what we might call toxic positivity, where only optimism and praise and positive thoughts, feelings, and expressions are acceptable. Anything that is negative, critical, or that questions something deemed as the “in thing” (hype) is not allowed. Spend any time on social media or any kind of group activity and you’ll see it in action.

While I cringed every time Mila, the main character, said “For the love of Lenin” it is probably an accurate portrayal of how Lenin came to replace God in the lives of many people who bought into the poison he and his cohorts were selling. (This is phrase I don’t ever recall hearing but different country, different generation).

Mila is very realistic in that she understood the games that had to be played in the Soviet system–like saying, doing, and parroting the right things (i.e. you know it as political correctness). I did not get a sense that Quinn herself was taking sides in this, because she balanced it out with such things as Mila’s comparative diary entries, “official version” vs “unofficial version.”

Mila is a sympathetic character. She was a mother at fifteen (yes, under the Soviet system which would not punish the much older man who got her pregnant and married her only because her father forced the issue). Mila had to move back with her parents in order to raise her son. Despite multiple attempts to divorce, she was unsuccessful (because, again, the Soviet system was set up in the favor of husbands and fathers who were not required to provide for or be in their children’s lives).

She had to somehow make it while raising her son, working at a factory, attending school, including university, and doing all the right Party volunteering. She had help from her parents, but we’re still talking about being a single mother going to work and school and being a good little communist (which meant waiting in ration lines and doing the other jobs we had to do, the ones that earned us real money not the worthless money they paid us with). Despite these hardships she decided to take up shooting as a hobby, so that she could teach her son. She knew that she had to be both mother and father to the boy. That’s how Mila ended up a sniper in the Soviet Army during WWII.

I really appreciated that patriotism and “love of Lenin and the Party” were not the only things driving her. She had very personal stakes in this–she wanted to protect her son. She wanted to be able to teach him that grown-ups do things by example and she had to be that example in his life. This is something sorely lacking in stories featuring the “Strong Female Character” (SFC) trope which is just a caricature, a man with boobs who just punches things and shoots stuff.

Unlike the SFC, Mila is never the strongest, fastest, smartest, best-at-everything. No, Mila has to struggle and fight and earn the respect of those around her. She is wounded. She makes mistakes (real ones that cost lives). She is actually surrounded by men who are stronger, faster, and smarter than she is. Men she must train and lead into battle. And while she does put on her “respect my rank” attitude initially, she goes on to earn their respect. Unlike in stories where the presence of the SFC requires that all men be automatically weaker, slower, and dumber in order to make her look good.

If there was a fault with Mila (and it’s really not) is that she was a fish who had no sense of being in water. Some of her comparisons with how things were the same in the US as in the USSR really showed this. There’s a scene where she is gifted some diamonds (a necklace, bracelets, and a brooch). She immediately thinks that she should give the brooch to the political officer minding her as a bribe so that he can gift it to his wife or mistress. And then immediately figures it must be the same in the US. No, actually it’s not even though she can be forgiven for thinking this since she was in Washington DC at the time. While DC is corrupt and bribes happen all the time (whether actual bribes of money or the trading of favors) there is no political officer hovering–the IRS, yes, but not a member of the Party. And while you may be fined and jailed for failing to pay taxes on that kind of gift, you’re very unlikely to get shot for it (at least not yet).

The drama with the diamonds was probably inserted to make a point and I do appreciate how well it was handled. I’m not the type of reader to confuse the character with the writer, and that’s why I think that extending the drama with the diamonds to the epilogue worked so well. It’s fifteen years later and Mila is back in the USSR with a new husband whom she must keep safe because his father criticized Stalin and thus his entire family was wiped out. The diamonds go to pay the right bribes to keep him safe. Fish. Water. Well done. I was especially impressed with the balance imparted in the narrative and the fact that she included an epilogue and filled it with all the right things. The main story was over. The epilogue was absolutely necessary–as an epilogue.

Last, I loved, loved, loved that she solved the story problem with my favorite type of gun. Thank you for doing the research on that one and getting it right.

Present tense. It’s horrid, even done by Quinn. Nothing pushes me out of a story faster than something that should have been past tense written as present. There are several present tense entries by Mrs. Roosevelt sprinkled throughout since this story is dual time-line, i.e. we hop back and forth to a post-WWII visit to the White House. I skipped them.

The use of “the marksman” instead of giving us the name of the assassin failed to convey ANY sense of tension. He knew who he was so withholding that information from the reader was annoying. It would have been much more interesting and tension-inducing to know who he was so we could worry when he showed up in Mila’s viewpoint. Instead he was some “anonymous” shadowy figure. Hell, you could even write an omni narrator and say something like “The would-be assassin went by George, but that was not really his name, just the one he was using for the job” and gone with that. Or even used his actual name. It wouldn’t have mattered at all if we knew his actual name. But the attempt to play with the reader here was insulting. And it denied us much needed tension since he was interacting with her and the “big reveal” wasn’t. Not at all.