Finally writing my sons into a story 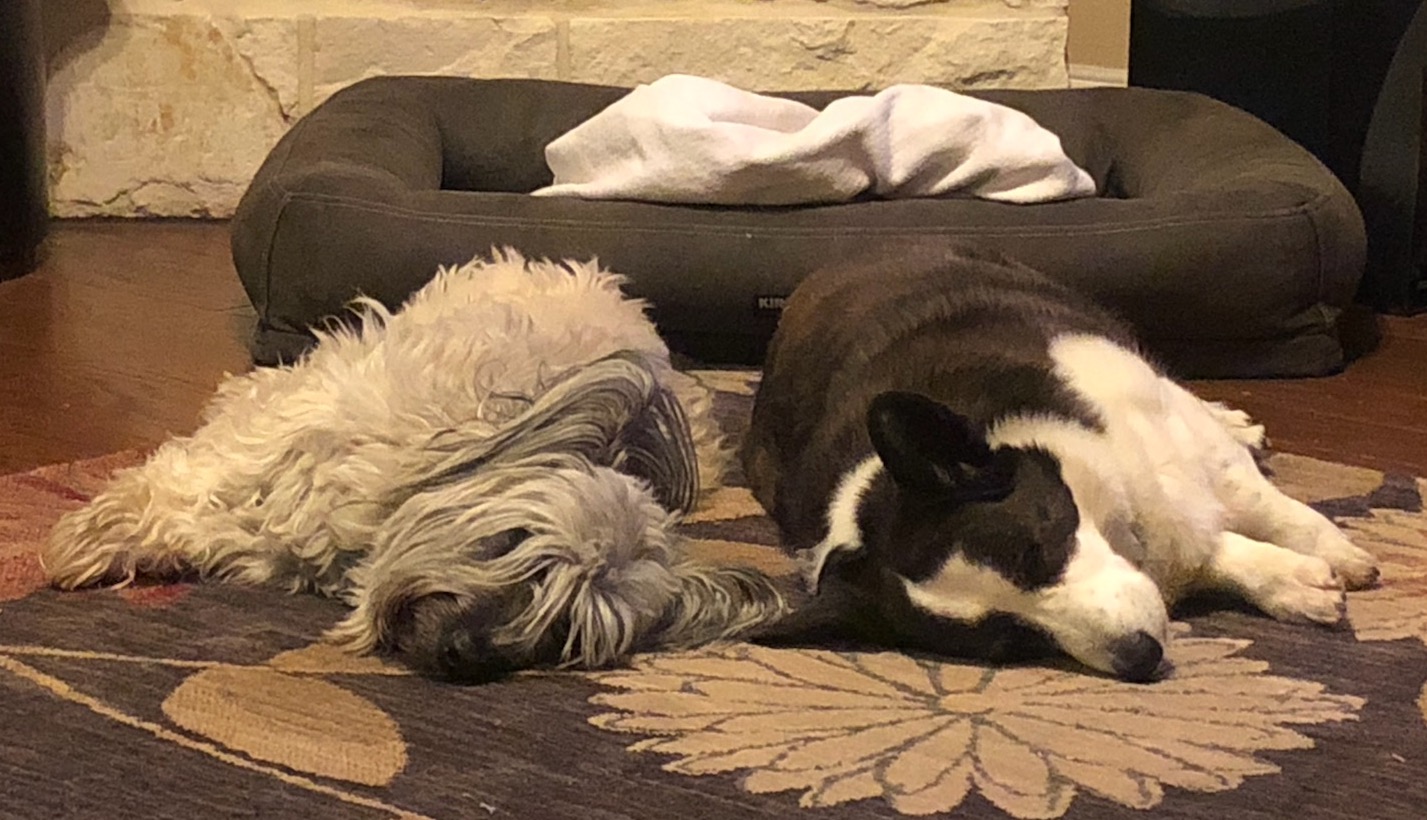 If you read my newsletter or follow me on social media, you’ll know that I have two dogs, a Skye Terrier* we call DespairBear and a Welsh Cardigan corgi* (the one with the tail) we refer to as CorgiSan. I do refer to them as my sons and also by other names, depending on what they’re doing. Here is an excerpt from that WiP (work in progress).

Maeve shrieked as she stepped out of the onsen and into the muted light of sunrise.

Talia looked down at the source of Maeve’s distress. A gray, robot who looked like a desperate teddy bear with its long body and stubby legs stared up at her with a pair of mismatched cybernetic eyes. It looked like it had tangled itself up in some netting because he looked like he was wearing a ghilie suit. Branches and odd bits of junk, flowers, and grasses clung to the netting, a cartoonish parody of a sniper’s camouflage.

A second robot, covered in brown plates that looked like they’d been salvaged from a dump, bumped into Maeve’s other leg and nuzzled into her just like a real dog would. Just as long and short as the gray one, this one was wider in the body thanks to a set of what looked like compressed gas cartridges—a luxury this far out from Sakura and probably empty—tucked atop the panniers welded onto the shell. And were those maneuvering nozzles of some kind, riding where the tail would have been?

The aperture of one of its cybernetic eyes seemed to be stuck, making it look like it was perpetually judging whatever it looked at.

On Earth and in big cities like Sakura, Talia had seen something less dog-like being used for police work. She’d even seen models used to help carry supplies on the battlefield. But those robots had been long-legged and donkey-sized. Unlike the headless military models which looked more like spiders, this pair had swiveling heads with segmented plates that made them look like they had muzzles.

Maeve reached down and petted the brown one. The gray one pushed its counterpart aside, vying for equal treatment.

“Might as well pet them,” Maeve said. “Or they’ll tangle up in your legs until you do.”

“These are my sons,” a male voice said. “Trial and Error.”

Talia looked up. An older man with a white beard and a bald head was coming up the steps leading into the onsen. He wore a sheathed bowie knife at his belt, but no gun. At least not one that she could see.

If you’d like to be the first to read such excerpts, be sure to subscribe to my newsletter.