The Rose Code uses three actual strong women (not “strong female characters”) to tell a story of love and war. 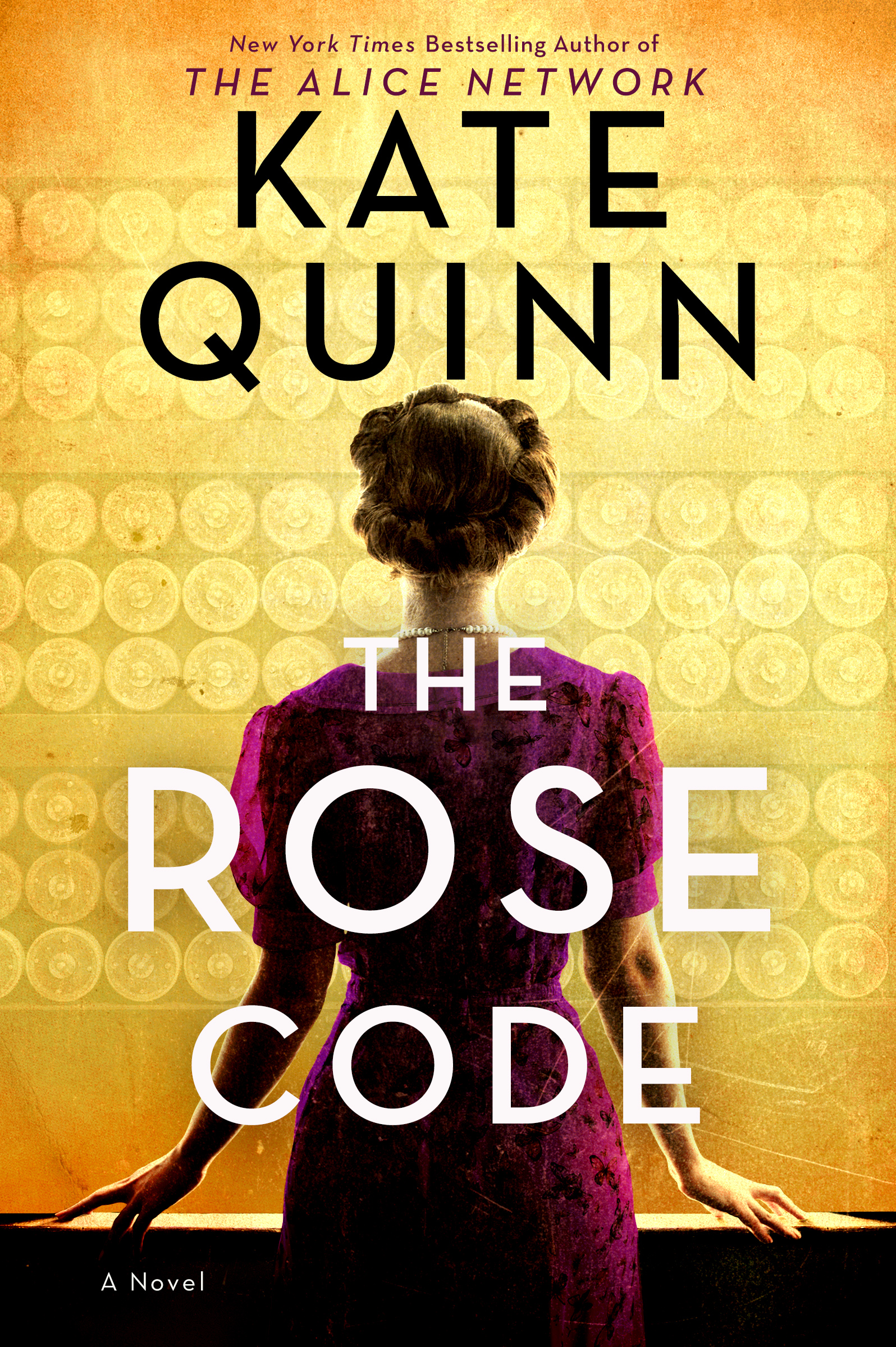 This review is going to be a little different, mostly because this book was, at least in terms of what I’ve come to expect and like about Kate Quinn’s* excellently written (no, that does not mean it’s a navel-gazing book) historicals.

My first quibble with this novel was the clear lack of a protagonist. It felt very much like an ensemble movie (think Avengers* rather than Captain America*). It made it much harder to stay in the story and took me far longer to finish than it should have.

To be clear, the issue is not that the story is being told from the viewpoint of multiple characters. I love multiple viewpoint because (when done right) it allows for a level of tension that is hard to pull off in most single-viewpoint stories. I even like stories with dual protagonists (most Romances tend to be dual protag). But the lack of a clear protagonist, the dilution of the story by having three women narrators, one of which doesn’t come into the story until chapter four and takes even longer to get rolling, affected this story in a negative way.

I’m not sure it could have been done differently, but I was willing to give Quinn the benefit of the doubt. I was just going, “please, no deus ex machina, please, oh please.” A deus ex machina ending is just one of the things I worry about when I see disjointed beginnings with either no clear protagonists or an ensemble cast, or far too many time jumps. I’ve just been burned too many times.

We have Osla who is the debutante type, Mab, the girl from the wrong side of the tracks, and Beth, an autistic girl who just happened to be living in the same house that was ordered to provide lodgings for Osla and Mab. They all end up as decoders of some kind at Blechley Park, the place where Alan Turing cracked Enigma. If you want the backstory on this, may I suggest the movie The Imitation Game* with Benedict Cumberbach. I offer no commentary on the veracity of the events in this movie, just the relevance of it as a backdrop.

Alan Turing is mentioned, but not a character, which is actually fine. I can appreciate that this would have been another story altogether if he was more than a passing reference and that story has been done.

The Rose Code* works very hard to present us with these very different women coming from different walks of life and what it was like to live in England during WW2. If you are looking for a story about generals refighting the war, this is not the story for you. There’s barely any staff meetings in this at all–or speeches, orders of battle, supply lists, or policies and procedure memos disguised as telling (oh so much telling) breaks in the narrative.

Amid the drama of war, we get three distinct characters who become good friends. The first half of the book is dedicated to this storyline. While Osla and Mab are introduced right after each other, it takes us longer to meet Beth. Part of the reason for this is so that we can get to know her through their eyes–she is being abused by her mother who is a religious zealot of the worst kind and ignored by her father who is a useless human being who does whatever he is told. Shy, downtrodden, and meek, Beth turns out to be a genius rather than “slow” like she’s been told all her life. They didn’t have a word for autism back then so that word is not used and we get to deduce what’s happening via Osla and Mab and then Beth as she comes out of her shell.

The worldbuilding that Quinn does is — as always — quite excellent. It focuses on the personal stuff first and foremost. It’s why the characters are real and engaging.

This is a world where Beth’s love interest is a Cambridge man of non-Caucasian descent who falls in love with her mind. Truly. He does. It’s not a line, although at first we can’t blame her for thinking it is. But he is married and she’s a “good girl.” She hasn’t had a choice thanks to her overbearing bitch of a “mother” and milquetoast “father.” Yes, I’m bringing modern sensibilities into this, but Quinn does not. At least I don’t think she does. I didn’t get to live in 1940s England so I can’t be sure of some of the sentiments on display, such as…

Zarb (the man that Beth falls for) is married because he got a girlfriend (a barmaid) pregnant and they decided to do the right thing for their son. They will never divorce because of their son, to whom they both feel a duty and not just because he’s in braces due to polio. They have an open relationship, as in the wife takes Beth aside and tells her how happy she is that Zarb has finally found someone he can be in love with and they have her blessing. The wife is in a relationship with a man who is a pilot and she wants her husband to be happy.

This is the kind of responsible, honorable devotion that you just don’t see touted much in fiction (or real life) today. I was pleasantly surprised. It emphasizes personal responsibility (to the child, first and foremost) rather than servicing the idea of consequence-free sex and pleasure-seeking. Now, that is more like the WW2 generation I remember via my great-aunt and great-uncle.

Another interesting relationship is that of Mab and Francis. Mab got pregnant when she was young, had the baby, and her mother is raising the girl as Mab’s sister. Mab’s goal in life is to shed her wrong-side-of-the-tracks upbringing and become the best wife she can be to a man who will treat her right. I was stunned at her thoughts about what it would take to get to that point and her willingness to do what today would be radical things like keep his house, have his kids, warm his bed, and make a good future together. She talks about it in very grown up terms, not silly romantic notions, as an actual adult who sees her own value in those things. She does not see herself as an oppressed, barefoot and pregnant woman forced to be less than she could be. She sees herself as a partner who takes care of him and his needs and is taken care of in return. I was floored. This is not allowed in modern fiction, is it? I know I haven’t seen much of it.

Meanwhile, Osla is dating Prince Philip, the future prince consort of England, and yes, it was very weird reading about him as a fictional character. The point is that all of these women were in very interesting, unconventional relationships. Osla has been working to shed her “dumb deb” (debutante) image, the one where she is nothing but someone who goes shopping, has her hair done, and goes to parties and is “of society.” She wants to be a functional, useful member of society. Again, shocker! Social media would have words for you. It’s all about the likes, baby.

Why I kept reading

It is these types of interesting characters that kept me despite issues I had with the structure, the lack of a clear protagonist (it was Beth; she’s the one that solves the story problem) and the addition of a story frame (the post-war storyline; probably the most accessible example of a story frame I can give you is the Princess Bride; the grandfather reading the story to his sick grandchild is the frame, a story that touches the other story at several points, not just via prologue and epilogue) that complicates an already diluted narrative.

Probably my biggest pet peeve was the withholding of information regarding who Osla’s fiance/husband was at different part of the story. It would have added a lot of dramatic tension to know rather than hold it back for a reveal. Since the character certainly knew who she was engaged to, we should have known too. This trick was repeated with Mab as well and I had to backtrack several times to see if I’d missed something. This is probably why it took me so long to get through it and why I was vacillating between staying with it and finishing it out.

While not as good as The Alice Network* or The Diamond Eye*, I do recommend this book. It has a visceral feel and the research is solid. Quinn goes into what she made up for dramatic effect, and what was part of real history. But most of all, if you’re going to read it, read it for the characters who are not the “strong female character” caricatures. The are actually strong women. Heroes. Survivors.