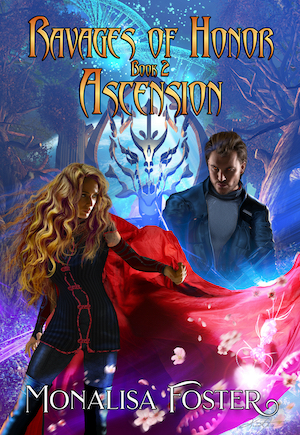 I am so happy to announce that the sequel to Ravages of Honor: Conquest (Book 1) is now available for pre-order. It will be available for download on Friday, Nov. 19, 2021. You can click here to be taken to your favorite retailer.

Would you embrace darkness to save your child?

For decades, war has crept ever closer and now, Syteria, a rebellious human woman Darien has chosen to be his future queen may be the spark that sets the Imperium to flame.

When Syteria crosses paths with the emperor’s agents, the unthinkable happens.

With the survival of both races in peril, with the future of House Dobromil on the line, the stakes for Darien and Syteria are higher than ever.

Driven by death and betrayal, victory and defeat, tragedy and secrets, can Syteria and Darien ascend to fulfill their destinies?

Ravages of Honor: Ascension picks up right after the end of Ravages of Honor: Conquest. While it can be read as a standalone (it is a complete story with its own beginning, middle, and end), it was meant to be read in sequence.

A funny thing happened on the way to publication. I had always thought of book 1 as Ravages of Honor because of this quote from Galen:

“I’m sorry. The ravages of my master’s honor were not meant to be borne by a human.”

But as I was finishing up the book (it took me three years to write it) I realized that the theme of it was one of conquest. The conquest of fear, of one’s desires, of the unknown, of one’s self. Syteria had to conquer her fears, adapt to an alien world, and rediscover the person she was meant to be, the person that the Rhoans destroyed. And she had to learn to trust enough to fall in love–something that would have earned her a death sentence back on Rho.

Darien is conquered by Syteria as much as Syteria is conquered by Darien. So, when it came time to upload the book, I gave it the sub-title of Conquest, but left it off the cover because I thought it would be too cluttered.

For book 2, the theme is one of ascension. To ascend means to rise to a higher level. I hinted at it in RoH1:Conquest:

He opened the cylinder. It was a very short note, written in a hurried scrawl. Deploy to Gamma Iramana. End the practice called the Rite of Ascension. Lord Dobromil.

“Our loyalty—yours and mine—will be tested,” he said as amber returned to his eyes. “This too is part of being mine.”

But even Darien didn’t realize at the time just how they would be tested, or that they would have to prove their loyalty to his father. When I wrote those lines, I had a solid idea of how I wanted book 2 to end, but I didn’t realize just how dark and difficult that path would be for both of them. I rewrote the last third of the book twice because it was too dark. As a writer, we have to put our characters in peril, to challenge them to grow, to drag them (kicking and screaming if necessary) to a place where they have to get up (to rise again) no matter how badly they’ve been beaten down. Be warned, then, that RoH2:Ascension, is a darker story than Conquest was. It had to be. But be assured that their Happily Ever After was well-earned.

“I understand your distaste,” he said. “I really do. So perverse is man that he prefers to be misgoverned by his own kind than to be well-ruled by another.”

I put them there for a reason. I think you will recognize the subplot around the Rite of Ascension.

For those of you who don’t know what I’m talking about, rest easy. You don’t need to know in order for the story to make sense, so just sit back and enjoy the ride.