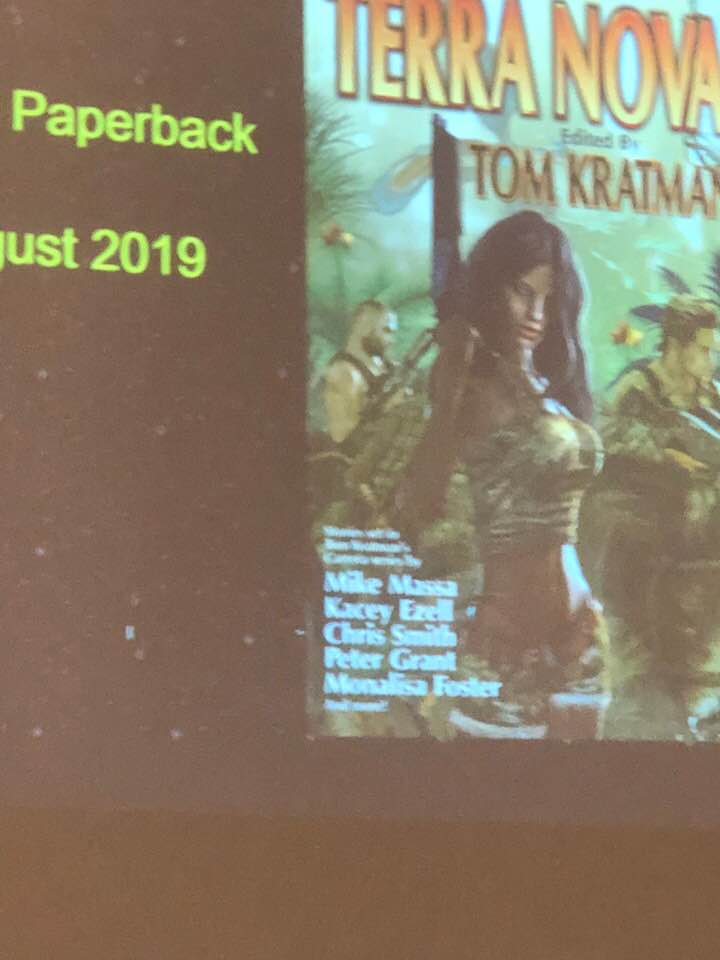 August turned out to be a busy month. Far busier than I had expected.

On August 17th, I found out that my story for Tom Kratman‘s upcoming Carreraverse anthology (Terra Nova: The Wars of Liberation) made the cover. Call me whacky, but the donkeys are my favorite. When I was researching mule trains for “Bellona’s Gift” (my story) I learned that mule trains actually consist of a bell mare (who leads the train, because all mules have a horse as a mother and will instinctively follow her), the mules, and a donkey. Unlike mules, donkeys stand and fight. They are the equine version of a guard dog and I just couldn’t resist having one, not just for the sake of realism, but because any animal with strong protective instincts has a special place in my heart.

Also on the cover, several elements from the Carreraverse–a trixie chasing a moonbat, and progressivines. What a fun universe to play in. It was such a great honor to be included.

It was an even greater honor–and shock–to find out that I will be making my Baen debut with my name on the cover. I found this out at the Baen Roadshow at DragonCon. Even with a photographic evidence (snapped in haste) it’s still hard to believe. Terra Nova: The Wars of Liberation is set for release in August 2019.

On August 20th, I released my first self-published work of fiction, my hard SF novella, Promethea Invicta. It’s available not just on Amazon, but on Kobo, iBooks, Scribd, Nook, and Smashwords.

Shortly after releasing Promethea Invicta I got a request for an audiobook version of it. One of my writer friends (and a great sci-fi author), Karl K. Gallagher, who had recorded his own audiobooks, was kind enough to point me in the right direction. I devoured Making Tracks: A Writer’s Guide to Audiobooks (and How to Produce Them): Second Edition

in a day and started experimenting with Audacity (software) via some YouTube tutorials. I found out that the best place to read was my closet.

And you guys thoughts that writers just wrote, didn’t you? I wish that were true. We wear many hats. Thinking back, I had to learn how to do layouts for my manuscripts, write ad copy, sales copy, blurbs, and use several platforms to sell my books. So there are definitely times when marketing eats up a lot of your precious writing time. Then there’s self-promotion and the introvert’s kryptonite–networking.

On August 28th, a wonderful writer’s milestone happened: I got another rejection for my novelette-length female space samurai story, called Featherlight. The reason this is a milestone is because I didn’t even blink. In fact, I’d even forgotten I’d sent it out or where. Rather than feel disappointed, I was looking at it as an opportunity to expand it past the constraints of most pro-rate magazines which tend to limit the word count to between 15K and 17K words.

Then as I was preparing for DragonCon I found out that eight outfits was nowhere near enough and packed another. Or two. This was my very first DragonCon and while I had a vague idea for what it was, it turned out to be far more intense. Only 80K people. No problem. My goal for next year is to attend as a pro.

Several other wonderful things happened at DragonCon, but I can’t yet tell you what they were. Not yet.

Which brings me back to why you might want to subscribe to my newsletter. First, I won’t flood your inbox with a ton of useless stuff, just relevant updates, maybe 2-3 times a month. Second, the social media platform I’m most active on, Facebook, suppresses content. Just because you’ve liked my author page on Facebook, doesn’t mean that you’ll see the latest updates in a timely manner or at all, since Facebook makes its money selling ads. If you only occasionally use Facebook, chances are you’ll miss my posts. So, opt-in to my newsletter (it’s really easy; just fill in the newsletter opt-in in the upper left hand corner). To quote a memorable movie line, “It’s the only way to be sure.”