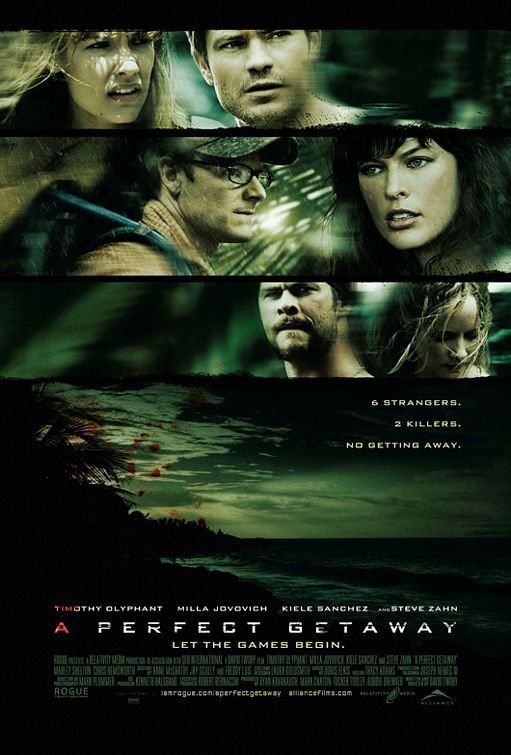 A Perfect Getaway is a 2009 movie starring Milla Jovovich, Chris Hemsworth, and Timothy Olyphant. I was also promised Gerard Butler.

For their honeymoon, newlyweds Cliff and Cydney head to the tropical islands of Hawaii. While journeying through the paradisaical countryside the couple encounters Kale and Cleo, two disgruntled hitchhikers and Nick and Gina, two wild but well-meaning spirits who help guide them through the lush jungles. The picturesque waterfalls and scenic mountainsides quickly give way to terror when Cliff and Cydney learn of a grisly murder that occurred nearby and realize that they’re being followed by chance acquaintances that suspiciously fit the description of the killers. (Source: IMDB)

It took $14M to make and grossed $15M in the USA. Despite the eye candy (there is some breathtaking scenery, and yes, I mean both kinds) and a lot of potential, it is a mediocre movie at best.

Well, someone suggested that I watch it and just before I got around to watching it, some of us were having a discussion on Facebook about how it’s easy to spot writers that are NOT prolific readers, but rather prolific movie watchers. So it seemed apropos to take this mediocre film and demonstrate what that means, i.e. when a writer is first and foremost, a movie watcher, rather than a reader.

The aforementioned prolific-movie-watcher-turned-writer sits down and writes a story like it was a movie. They are betrayed by a loss of perspective (loss of point-of-view) and a tendency to cheat by using cheap “cinematic” tricks in their writing.

To some extent, you can get away with cheap cinematic tricks in a movie. The Sixth Sense does it with camera angles, but it was a far more successful movie (grossing $293M in the USA vs the production cost of $40M) than A Perfect Getaway, and I want to go into why I think that was. Yes, you can credit some of the success to the star-power of having Bruce Willis in your film, not to mention the great job that Osment did portraying the troubled kid.

On the other hand, I hadn’t even known about A Perfect Getaway and my main reason for watching it was the cast, not because people were gushing about how great it was.

A Perfect Getaway starts with clips of wedding footage as the credits are rolling. It is, essentially, the equivalent of a prologue in a book. Then the movie picks up with the newlyweds, Cliff and Cydney on their honeymoon in Hawaii. So far, all perfectly appropriate. A prologue is followed by a time jump and the start of the movie is a second start rather than a continuation.

As Cliff is driving, Cydney is watching some of the wedding clips, all very believably, like a bride would. A few clever details are slipped in that sound like errors, but it was done well enough that, while I picked up on the errors, I didn’t think much of them. So far so good. And the eye candy had not even shown up, so I’m paying attention to the story rather than being distracted. It’s how it’s supposed to work.

The movie plods along, with false leads as to which of three couples introduced are really the killers. And it’s framed in such a way that you don’t think it’s Cliff and Cydney.

Thing is, once you do figure out that the Cliff and Cydney you know are NOT the Cliff and Cydney in the wedding, and you’re going “WTF!” the movie comes to a screeching halt by flashing back (in stark black-and-white) to a bunch of stuff that happened before the ersatz Cliff-and-Cydney-in-Hawaii movie starting point. And it worked just fine right up until they cut in scenes after the movie starting point, except that in the flashback, they are not the same as the first time they showed them to us, i.e. they cheated. The flashback is a different version. So, they deliberately withheld information, i.e. they tricked us.

Again, movie, so you can make the argument that movies are told from an external viewpoint, because they are. The camera floats around giving us an external perspective and we don’t get the characters’ thoughts except for the occasional voice-over. The acting conveys a lot and it’s fake, because we never know if the smile is real or not, like we’d know if we were reading a book and we were inside the character’s head and we knew the smile was put on to fool someone or if it was genuine.

Trouble is, I’ve seen this type of trickery used far too often in books. The author is thinking they’re so clever and that the reader is going to appreciate the “gotcha!” Maybe some will. I won’t. Because as much as A Perfect Getaway left me feeling cheated, it was only ninety-eight minutes of my life, rather than the eight-or-so hours of a typical novel. And if you think I’m going to appreciate a “Gotcha!” seven hours in, oh you are so, so wrong. I want a feeling of satisfaction, not that I’ve been cheated. Fail to give it to me and I’m not buying one more thing of yours, because the hours in my day are far too precious and few to waste on that kind of crap.

So, back to how can you tell when a writer is first and foremost, a movie watcher, rather than a reader.

Movies like A Perfect Getaway encourage that kind of bad writing, so if you are one of these people that thinks that prolific movie-watching has prepared you to be a writer, please consider reading some good books, preferably NOT media-tie-ins, but actual books. In fact, start with books that have not been made into movies.

Unlike The Sixth Sense, which could be written more or less along the lines of the movie by telling it from everyone’s point of view but that of Malcolm Crowe (who doesn’t know he’s dead) with the loss of only a few minutes of screen time (although even those could be short omni narration scenes), A Perfect Getaway is a cheat through-and-through.

One of the ironies of A Perfect Getaway, is that “Cliff” was supposed to be a screenwriter, That whole conversation about red snapper/herring is another clue that this whole movie is a Hollywood inside joke–on you, the audience. It wouldn’t surprise me if it was made in order to lose money. Hollywood does that. Writers can’t afford to.