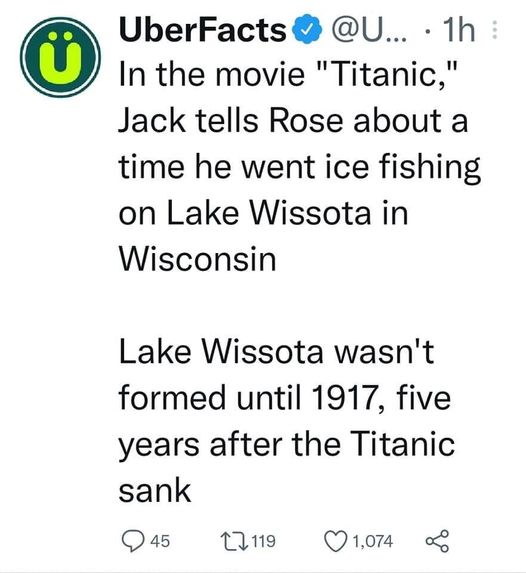 A few days ago I ran across this little gem of an image on social media and I had to save it and use it because it nails what a rivet counter is.

If you’ve ever written anything, you’ve likely run into one of these people. They delight in pointing out what they think is some inconsistency in your story. One that is usually irrelevant to anything at hand. For them, it’s all about showing off a factoid.

It is one thing to point out a fact that actually would have an effect on the story, especially a plot point. It all depends on the genre, of course. We hold (or should hold) hard sci-fi to a higher scientific rigor than space opera or space fantasy. We give a pass to discrepancies in alt history, because it is after all, an alternate version of history. Or it should be. There’s no point in writing it otherwise.

There are also elements of the writing craft that go into what makes for a relevant objection, something lost on the rivet counter. To play off the Titanic* theme of this post, a rivet counter would hone in on the use of appropriate technical language, for let’s say the davits used to lower the life boats. “A davit is any of various crane-like devices used on a ship for supporting, raising, and lowering equipment such as boats and anchors.”

Thing is, if the viewpoint character isn’t a sailor or doesn’t know that term, it’s a viewpoint violation for him/her to use it. A panicked debutante that knows nothing about ships and sailing is unlikely to describe the lowering of the lifeboats in technically accurate terms or even in any sort of detail. The rivet counter, unaware of anything as sophisticated as the limitations of viewpoint or the difference between character-narrator and author-narrator voice, will automatically assume that the writer got it wrong, when in fact the writer got it right.

This is why the rivet counter holds a special place in my heart and why my response to them is “Thank you, please drive through.” And keep driving. Please, don’t bother me again. You’re just not worth my time.

Do you think that the name of the lake in Wisconsin has any impact whatsoever on the story of Titanic* (especially as filtered through Rose or Jack)? The answer to that is an unequivocal no. Nothing in that movie would change by the name of that lake being wrong.

If you’re going to harp on something that would matter, think of the time they spend running around in supposedly freezing water while trying to free Jack from the handcuffs. Or a hundred other things that were ignored for the sake of story, things that truly would have made a difference.